We’re proud and happy to announce this year’s winner of the Shore Craft Beer Love Story is Amy West. She and her special someone will receive two tickets to Love on Tap, which is nearly sold out (so click here if you still didn’t get ’em) as well as a room at the Dunes Manor that evening.
Of course, there still is a chance to win tickets to the next Shore Craft Beer Fest (this one’s in Chincoteague). Download the app and participate in the Love on Tap FeBREWary challenge!

In the summer of 2015, we discovered the Shore Craft Beer challenges via a pamphlet my husband picked up for me at 3rd Wave Brewery. This is significant because not only does my husband drink very little, and drink no beer, he doesn’t even like beer.

Here are the runners-up in the order they were received. There were many more great stories that were nearly as good, but these turned out to be our favorites. Stay tuned for more promotions! 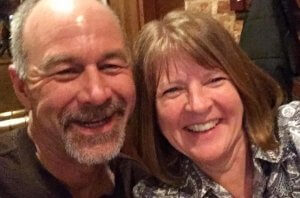 Last year in late January, I went on a date with someone I had met through Match.com. We met at a local brew pub, shared a beer and got to know one another. Things went well, so drinks became dinner and we agreed to see each other again. It wasn’t long before Valentine’s Day was upon us. At this point we’d been on four or five dates, but things were going very well, so we decided to go to the beach for Valentine’s weekend. Most of our friends thought we were nuts. “It’s too soon,” “It could be a really awkward ride home,” “Wait until summer” were some of the comments we received.

Against all that, we decided to go for it – in fact, we negotiated a few days off and extended the weekend to five days. We figured it would be a good way to see if we ‘had the right stuff.’ Hey, we’re both over 50, might as well not waste a lot of time figuring it out. Thursday came and we headed off. Things went well and as we approached Salisbury I suggested we stop by Evolution Brewing. I liked IPAs and Keith liked Blue Moon, so it was always a joke between us about my beer vs. his beer.

So in we walked and had a seat at the bar. After sampling several of the beers, we actually agreed on the Primal Pale Ale. We had a few beers, some wonderful food and had a blast talking to other people at the bar. In fact, we had so much fun, I think we stayed through both the happy hour and dinner crowd! (You can tell by the picture that we really enjoyed the beers!) What would normally be a four hour drive, turned into a nine hour drive thanks to our “quick stop” at Evolution Brewing. While we talked to each other, chatted with other guests and enjoyed some great beer, I became convinced we could make it work and that this guy was a keeper. I’m happy to report that after our five days together at the beach, we were both thinking of excuses to stay and take more time off, and over a year later we’re still going strong. Though I couldn’t say exactly when we fell in love, I’m quite sure those beers at Evo put us on the right path!

Eternal Love for each other? Or Craft Beer?

When a relationship, like a good craft beer, is at the bottom you tend to look for more of a good thing. We had reached the bottom of our relationship last August but instead of getting a different beer we decided to go back to best

My love affair with Shore Craft Beer began in the summer of 2014. It was a warm and sunny day in late July when my wife and I paid our first visit to 45th Street Taphouse Bar & Grille in Ocean City. We sat out on