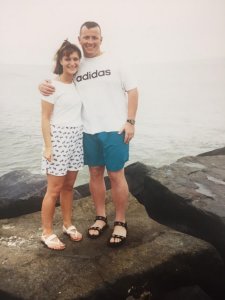 My love affair with Shore Craft Beer began in the summer of 2014. It was a warm and sunny day in late July when my wife and I paid our first visit to 45th Street Taphouse Bar & Grille in Ocean City. We sat out on the patio, and with a nice breeze blowing, all the signs were pointing to a beautiful early dinner. I looked over the beer list and I noticed a beer called Dogfish Head 60 Minute IPA. After reading the descriptions on the beer list about the all the beer options, I decided to stray out of my comfort zone and try a beer I had never tasted before: the Dogfish Head 60 Minute IPA. Within minutes we were served our beers, and what was already a pleasureful moment turned into the perfect moment as soon as I took a sip of my draft 60 Minute IPA. The 60 Minute IPA was the perfect blend of aroma and bitterness, and with each sip I took I fell more in love with my choice. It was a moment that will be etched in my mind forever, as not only was I on vacation with my beautiful wife of 22 years, but I had found the best beer I had ever tasted.
As we sat there for the next couple of hours, we enjoyed some delicious food and watched the sun drop lower and lower over the Isle of Wight Bay. During this time, we also consumed several more Dogfish Head IPAs.
Since that day, I have taken the time to enjoy many of the other craft beers produced on Delmarva. If I had never tried that Shore Craft Beer IPA in the summer of 2014, I may have never had the desire to sample many of the other Delmarva craft beers. You could say that I found the two loves of my life on Delmarva – it is where I met my wife Gina in the summer of 1992, and it is where I first tasted a Shore Craft Beer many years later. Between meeting my wife in the summer of 1992 and tasting my fist Shore Craft Beer in 2014, many important events took place. Namely, Gina and I got engaged in Delmarva in 1993, and we took our honeymoon in Delmarva in 1994. Twenty-two plus years and four kids later, I can say with certainty that Gina and I have learned a lot of life lessons along the way. One of those lessons is that you need to learn to know and appreciate a good thing when you see it – and Shore Craft Beers fit that description. For these reasons I can honestly say Delmarva is where I met the two loves of my life – my lovely wife and Shore Craft Beer. I am somewhat of a private person, so I don’t wish to divulge which of the two I love more. As the saying goes, I don’t kiss and tell…and I also don’t sip and tell.