When most people think of a craft beer drinkers they probably picture a guy in his 20s, 30s or 40s. What I’m going to guess they aren’t picturing is someone like me: a female in her 30s. Well, that’s all changing. The craft beer industry is seeing a more diverse craft beer drinking population, including a larger number of women drinking craft beer than ever before. According to Bart Watson, Chief Economist for the Brewers Association, women between the ages of 21 and 34 account for 15 percent of total craft volume. “Elementary, my dear Watson.”

As I started exploring craft beer about fifteen years ago, there wasn’t a huge female presence. You wouldn’t see a ton of women drinking craft beer or selling it, let alone brewing it. I was often one of only a handful of woman sipping on craft beer wherever I might be, as most women were drinking wine or a Cosmo (it was right in the midst of the whole Sex and the City craze), and if there were women drinking beer, it was usually that yellow fizzy stuff brewed in mass quantities.

When I would make a solo trip to the liquor store in search of craft beer I was often approached in liquor stores to see if I needed help, and not necessarily in a, “are you finding what you’re looking for” kind of way, more in a, “you know the wine and vodka section is over there” kind of way. It was insulting, and more than anything, it was kind of annoying. It also fueled me to learn about more beer, and encourage my female friends to stop saying “I just don’t like the way beer tastes.” I wanted to open their eyes – and taste buds – to the various styles of beer. I was determined to prove that wine drinkers can find a beer they like; Cosmo drinkers can find a beer they like, and those that love chocolate? I could definitely find a beer they’d like!

Now there are groups like The Pink Boot Society, Barley’s Angels, and Girls Pint Out, which I’m currently involved in by running the Delaware Chapter.  These groups encourage women to hang out with like-minded women and talk beer, or just hang out and talk about everything and anything over a pint or two.

Girls Pint Out is a national organization that encourages building a community of women who love craft beer and who are an active, contributing part of the greater craft beer community. I love being a part of such an organization. Started in Indiana in 2010, there are now over 80 chapters in more than 35 states and Washington, DC. Let that sink in: there are over 80 chapters of women drinking and basking in the world of craft beer. How cool is that?

One of the best parts of being involved in an organization like Girls Pint Out is getting an opportunity to spend even more time with craft beer loving girlfriends of mine, while also meeting new women who are excited about what’s going on in the state of craft beer, in and around Delaware.

Founded in the fall of 2014, the Delaware chapter has hosted 11 events including a bottle share at a local boutique, happy hours, pizza and beer pairings, a beer dinner, a private tour and tasting at the Dogfish Head Brewery (with a Dogfish brat and Hard Tack Chowdah! sampling, to boot!), Girl Scout cookie pairing, and a Pint and Paint. Most recently we scheduled a repeat event, Dogfish Beer:30 Happy Hour at the Wilmington Blue Rocks (this was the third time we’ve hosted this event)! Want to hear something pretty darn awesome? The Blue Rocks featured a photo of 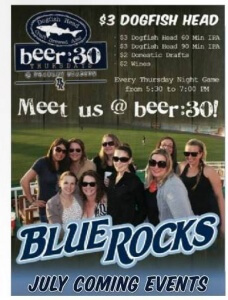 our group from one of last year’s Beer:30 game in several advertisements for most of last summer and again this year. Talk about feeling pretty darn proud to be a bunch of beer drinking girls!

Dogfish Beer:30 is a blast! Every time the Blue Rocks have a home game on a Thursday night, it’s time for Dogfish Beer:30. Held from 5:30pm – 7:00 pm on the Dogfish Deck along the first base picnic area, it’s a great spot to take in the ballgame. Bring cash (beers are $3 a pop) and find yourself a table and spend your Thursday night taking in America’s favorite pastime with a fantastic local brew.

The July and August Delaware Girls Pint Out events are just getting some details finalized. Look for updates on that on the Facebook page: www.facebook.com/delawareGPO. We’re looking to have a fun private happy hour planned at the newly opened Constitution Yards Beer Garden and during Hagley Museum’s Bike & Hike & Brew in August. Ladies, come on out. Bring your girlfriends. But leave the guys at home!

As someone who only managed to drink the brews from Iron Hill Newark (the now defunct Raspberry Wheat) on nights when I could coerce the college roommates to take advantage of their half-pitchers, Yuengling and Heineken Light (yes, I’ll freely admit I drank those beers far too much on the regular!) were my go to beers. I still remember the first time I tried that Raspberry Wheat (Dogfish 60 Minute IPA and an IPA from Southern Tier, too), I very quickly realized I belonged in that 15 percent of female craft beer drinkers. And I always will.

I'm a Jersey Girl who made her home in Delaware after graduating from the University of Delaware many moons ago. I'm a craft beer lover, traveler, mountain biker, creator of goodness in the kitchen (most of the time, anyway), and concert goer. I'm the Delaware chapter head of our local Girls Pint Out, a national craft beer organization for women who's mission is to build a community of women who love craft beer and who are an active, contributing part of the greater craft beer community. I'm also the co-founder of Delaware Hop Scene, a marketing strategist and data strategist by day, and a hop head and IPA lover who never shies away from trying something new and unique from a favorite brewery or a new place I've stumbled upon in my travels. Cheers!