Time isn’t quite out for holiday shopping, but it’s kinda almost out. I wasn’t going to do a holiday craft beer gift guide but then I was shopping and noticed an appalling number of lame beer-related gifts in the stores (as well as online) and figured I’d better pipe up. I’m fortunate enough to be able to visit a lot of the local breweries. And, in case you missed it, also do a fair amount of talking about craft beer and homebrewing. So I wrote this:

Gifts in the Brewery

There’s nothing selfish about popping by a local brewery, treating yourself to a pint and walking away with some merch or even a nice bottle of exclusive beer. I did. Here were some of my favorites:

Evo’s Menagerie series is back with Menagerie 10 a Russian Imperial Stout aged on whiskey barrels. If you’re not familiar with the series, the brewery describes it like this:
Evolution’s Menagerie Series is an assorted creation of one-offs that will (probably) never be seen again. They are usually (but not always) oak aged and often (but not exclusively) blended. Every so often we have decided to bottle a couple of these so we can lay some down in our cellar. Bottle Conditioned. Just in time for the holidays! Be sure to get to the EVO Tasting Room to pick up some bottles. Ideal for drinking, aging and gift giving. 12% ABV
Gear Pick:
Our EVO Drink Tank Growlers also available with the Keg Cap Kit that keeps be longer and turns your growler into a Mini Keg. 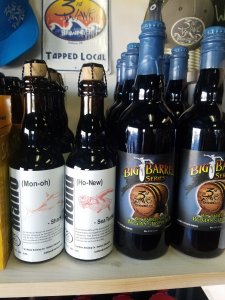 It’s been a busy year for our friends at 3rd Wave which has released a couple different specially created beers. The latest in its big barrel series, the Rum Barrel Aged Belgian Strong Ale has is crisp, clear, golden in color and has a spicy with medium body with mild hop aromas and flavors. It’s described as complex, slightly fruity with a dry finish. and as pairing well with BBQ, cheese (Blue, Gorgonzola, Limburger) and grilled chicken.
Additionally, they have two anniversary releases:

For the brewer you have (or want) in your life

Drinking beer you’ve made yourself is as satisfying a thing as a person can want. The first step to brewing is to brew and you can do that yourself or you can take a free class in the new year. Additionally, you can swing by Xtreme Brewing and Wine Supplies in Laurel and pick up everything from a starter kit to gear for the most advanced homebrewer.

Take a Fordham and Dominion trip 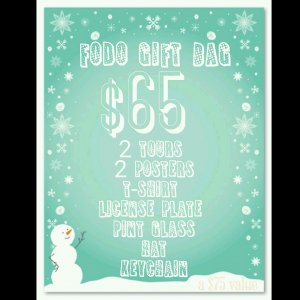 Swing by and see our friends at Fordham and Dominion in their beer compound and grab some beer to drink and some gifts to go. They’ve put together a FODO Gift Bag to take the pressure off if you’re having trouble deciding. It includes two tours, a tee shirt, a license plate, a glass, a FODO Hat, bottle opener key chain, and two posters. Plus,treat yourself to a tour while you’re there. After all, you wouldn’t want to give an experience like that without, you know, test driving it first…

Beer by the beach? Yes, please!

If you’re in Ocean City consider stopping by Backshore Brewing, home of the Hoop Tea and picking up some limited edition Lavender Lemonade Hoop Tea for the holidays. All of the proceeds are donated to the Believe In Tomorrow Children’s House By The Sea in Ocean City.

They are sold in 4 packs and only available at Backshore Brewing Co.

If you can’t make it out to a brewery (and there are worse things, I’m sure) but want to get something that makes you look as if you have, there are lots of things available online (and some even exclusively on line).

Tons of beachy wearables and glasses are available at the 3rd Wave online store.

Everything that isn’t beer is available online was well. Shop from the comfort of your homw, here.

The Evo store has plenty of mailable branded items, from key chains to high end hoodies.

Make your own Ancient Ales 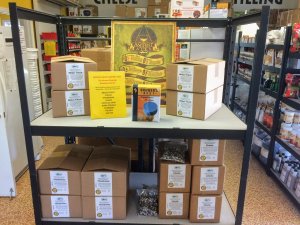 Xtreme Brewing has developed recipes in conjunction with Dogfish Head of that brands “Ancient Ales” series with specialty ingredients that taste just like those limited edition beers you’ve tried while they were around.
They also have mainline kits from Dogfish Head, 3rd Wave and Fin City if you want to brew local as well as drink local. Click here for the full list of beer kits.

Beyond beer, you also can learn to make wine at Xtreme. They have all the gear and classes for learning to make pretty much anything that is legal to brew. Xtreme also sells craft teas and coffees as well as cheese making kits. 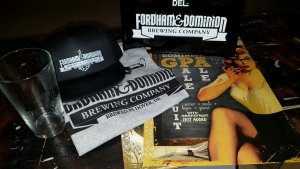 Whether you’re interested in posters or growlers, there’s plenty to be had from the online store at Fordham and Dominion, which is convenient if you can’t make it to Dover. Click here for a link to all their online merchandise.

Of the millions who visit, a few are distracted by romantic visions of life at the beach and are left behind, never to return to the real world. Its an existence unaffected by time or authority. Days and nights blend together, signaled by sunrises over the ocean and sunsets in the bay.

Grab some Fin City gear while you can!

Purchase t-shirts, hats, glassware and more from the Fin City Brewery Store at Hooper’s Crab House in Ocean City Maryland on the Bay!

If you’ve read this far, I dare you to read further. There’s an ongoing virtual signing at ShoreCraftBeer.com wherein I personalize the book of your choice and mail it to you:

Delaware Beer: The Story of Brewing in the First State

In 1873 the German Lagers of Wilmington’s Diamond State Brewing rose to dominance, but after Prohibition the beer industry flagged and stagnated until 1995 when Dogfish Head opened in Rehoboth. That event inaugurated the new golden age of craft beer and made Delaware one of the leading craft beer producing destinations on the East Coast.

When Great Britain levied heavy taxes against the colonies, the Eastern Shore’s first beer geek, John Beale Bordley, swore off English ales and set his substantial estate to perfecting his own home brews. It took another two centuries and a revolution of a different kind to bring brewing back to the Maryland shore.