Summer is finally here, and for the past few years with increasing popularity the drink of the season is rosé. Drinking the delicate pink wine conjures images of warm summer afternoons, outdoor lunches in sidewalk bistros, beach-side bonfires and naturally, brunch. Bottle shops and wine stores can’t seem to stock enough of it. The hashtag #roseallday has 482,000 tags on Instagram. Selfies with glasses of wine are rampant.

To capitalize on the warm weather trend, more and more brewers are making rosé craft beers using the relatively new practice of mixing foods into the brewing process, co-fermenting with grape varietals’ skins or pulp used to make the wine. Occasionally they will use the wine itself in the process or ferment the beer in wine barrels. Rosé beers tend to have strong notes of fruit (usually berries) and lean into the realm of goses and sours that walk the line between tart and sweet, although saisons and hefeweizens are also common.

By making the crossover drinks, it allows brewers to capture new patrons, pulling from the wine crowd who typically don’t go for beer. According to Nielsen, in 2017, even though rosé was only 1.5% of the U.S. table wine market, sales soared over 50% totaling $258 million. It was also mentioned that nearly half of all rosé drinkers are millennials and women. While millennials certainly are heavy on the craft beer scene, women are still an demographic that brewers are trying to grow. In 2018, Nielsen reported that the craft beer drinking market is 31.5% female and 68.5% male, but this varies by region.

There’s another advantage to making rosé style beers: lower alcohol content. Glasses of wine can be crisp and refreshing but also can pack a punch with around a 12.5% ABV, making them an ill-fated choice for extended periods of drinking. Rosé beers tend to run closer to 5%, setting them up as a perfect daytime drink, although Brewery Bhavana out of Raleigh, North Carolina makes “Roselle” a bière de Champagne / bière Brut that checks in at a whopping 13%. That said, it’s modeled after a sparkling wine, with a taste the brewer’s claim is full of “hibiscus and rose hips…soft aromatics to balance its rough bubbles and clean, dry finish.” They age the beer over raspberries, cherries and grapefruit rinds and then mix it with their own stock of souring bacteria. They describe the process of making this bold beer as taking a full three months.

If lower ABV is more your speed, try Firestone Walker’s “Bretta Rosé.” What Firestone calls a “BrettaWeisse”, this Berliner Weisse checks in at 5.1%. Its main tasting note is raspberries with hints of the the French oak it was fermented in, twice. Firestone describes it as a “crisp effervescent concoction bursting with raspberry perfume and flavor, bracing acidity, underlying funk, and a clean refreshing finish.”  They also make “Rosalie,” a 5% pilsner and white wheat malted, traditionally hopped and co-fermented with grape varieties found around the corner from the brewery.  They also use hibiscus flowers, giving the pink hue typical of a rose.

Crooked Stave out of Denver, Colorado makes their own simply titled Sour Rosé, a 4.5% “wild ale” they ferment with “wild yeast” (yeast that occurs naturally in the environment) in oak foeders with blueberries and raspberries. (See a trend here?) It is bubbly, sour, and unfiltered. Showcasing bright effervescent characteristics, Sour Rosé is the perfect sour beer for all seasons and occasions. They actually package the cans with a touch of yeast to keep it fresh.

Anderson Valley Brewing, from Boonville, California makes Framboise Rose Gose, a kettle sour boiled with rose hips and raspberry puree. This bravo-hopped gose has a hibiscus flavor with tangy saltiness and finishes with raspberry. According to their website, this drink pairs with salad with balsamic vinaigrette, berry desserts, and goat cheese. It’s a 4.2% with 12 IBU, the lightest of the lot.

Rhinegeist, out of Cincinnati, Ohio debuted their take on rosé beer, “Bubbles” in 2016. It’s a dry, light ale with notes of peach and apple, made tart by cranberry. Like the others, it’s bubbly and fizzy with notes of tannins. Its hybrid nature makes it appealing to cider, beer and wine drinking. It’s slightly stronger than the others, at 6.2%.

Upland Brewing from Bloomington, Indiana makes “Oak & Rosé” a sour barrel-aged fruited ale made in collaboration with Oliver Winery. It’s re-fermented with the red wine Chambourcin, giving it it’s subtle pink hue. The brewers describe it as having notes of red cherries, red fruits, berries, stems, herbs, and for whatever reason, millipedes.

Concrete Beach Brewing, in Miami, Florida, makes their own “Rosé Ale.” It has some light tannins and is made with Zinfandel grapes and blueberries. It is somewhat sweet, and then clear-filtered. Another higher alcohol content beer, it rings in at 6.2%. 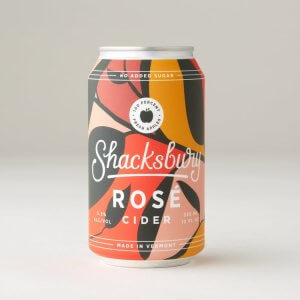 While not technically beers, ciders play part in the rosé non-wine beverage game. They lend themselves naturally to the flavors associated with wines, being made from apples. One of the most popular, and more expensive, is from Shacksbury Cider in Vergennes, Vermont. The 5.5% eponymous rosé cider will run you about $50 a twelve pack; that’s if you can get it. The cider gets it color from California sourced grape skins and is made from New England apples by pressing and fermenting them at cellar temperature.

Virtue Cider out of Fennville, Michigan makes their own “Rosé,” from heirloom local apples like Jonathans, Golden Russet, McIntosh, Winesap, Ida Red, and Northern Spy, as well as yeast and botanicals including citrus oil, sage, and hibiscus then aged in French oak barrels. Like a true rosé it has a dry, crisp finish and is higher in alcohol at 6.7%. They recommend pairing it with soft ripened cheeses, oysters, brunch dishes, or crisp, pickled vegetables from the garden.

Wölffer Estate Vineyard, located in Sagaponack, New York may have the fanciest bottle of rosé cider around. Titled “No. 139 Dry Rosé Cider,” they call it a “lifestyle” cider. Sweeter than their regular white ciders, the rosé is made from Jonagold, Mutsu (Crispin), Golden Delicious, Idared, Gold Rush and Northern Spy apples. This bright, shiny pink drink has notes of flowers and yeast, and what the vineyard describes as a “pure, clean mouthfeel,” a “nice balance of sweet fruit, elegant acidity and fine tannins that provide a long and pleasant finish,” topped off with a, ”CO2 mousse, making it very pleasant and playful.” With a description like that, clearly this cider is made at a winery.

Citizens Cider from Burlington, Vermont makes three apple based rosé ciders that span the fruit pairing spectrum: “Companion” made with tart cherry juice, “Americran” made with cranberries, and honorably mentioned for its clever name, “Brosé” made with blueberries.

If you like rosé, you can’t really go wrong with these wine-minded fermented drinks. With the onset of the summer heat, long lazy weekends and vacations on the horizon we suggest you give one of these alternatives a try the next time you go to uncork a fresh bottle of rosé. You may just find your new favorite drink.