Entering the craft beer community can be overwhelming for the uninitiated. There’s dynamic lingo, fluctuating trends and a variety of flavors to learn and love. If you are new to craft beer it can seem like everyone boarded the train years ago; they already know the whole culture and you’re still trying to wrap your head around a range of ABVs and IBUs.

It’s never too late to join the scene. You don’t have to pass a lab practical in chemistry to enjoy a great craft beer (though the science of zymurgy is cool and worth exploring). Of all the trials by fire we experience in life, joining the world of craft beer is one of the tastiest. Here’s a crash course from a sophomore who’s learning right alongside you.

One of my first brewery tours began in the tasting room with four samples. Our guide walked us through the steps of tasting, looking at color and clarity, breathing the scent. And lastly, before taking a sip, he told us to listen to the bubbles. A room of skeptical, but obedient, tourists lifted their glasses to their ears. The guide laughed. “I’m just kidding.”

With one joke, this tour guide had disarmed some of the pretension surrounding beer tasting and established instant rapport with his audience. I often recall how he demystified craft beer with straightforward narration and levity. It’s a great reminder that, ultimately, beer is about enjoyment. 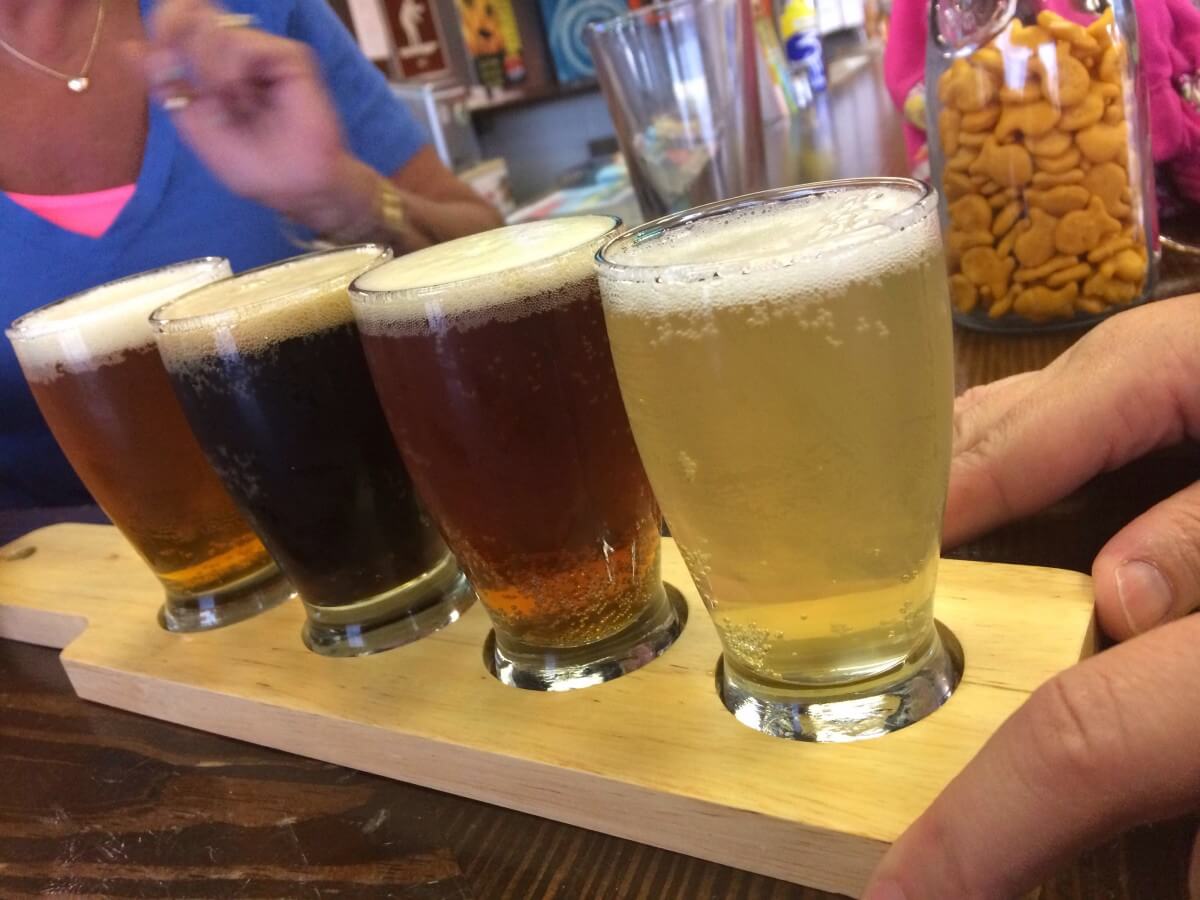 Let’s start with the concept of craft beer. The Brewer’s Association defines a craft brewer as small, independent, and traditional. They sum it up like this:

Cider and mead are not beer and therefore not eligible for craft beer consideration. Lambics, however, and other beers flavored with fruit or honey can be craft beers, provided the brewer meets the other criteria. Hard Lemonade or Soda? Not craft beer.

You may come across malt beverages that walk and talk like a craft beer, but their membership pin depends on the factors above.

There are many varieties of craft beer to suit different tastes. Knowing some key vocabulary can help you discover your preferences.

There are over 100 beer styles recognized by the Brewers Association, categorized by intensity, color, brewing process and regional influence. All those varieties fall into two groups: ales and lagers.

Ales are tops—top fermenting, that is—and they like it hot. Or warmer, I should say, at around 60-75 °F. Lagers are bottoms who love sweater weather. The yeast in lager ferments at the bottom of the vat and works slower and cooler at about 50-65 °F.

Popular styles of ale include wheat beer, porter, and stout. And, of course, most styles with ‘ale’ following an adjective like “amber” or “pale.” Lagers include pilsner, bock, Märzen, and a few other German varieties. Varieties such as Kölsch and cream ale are hybrid styles that use elements of both processes.

Ales tend to be more robust and aromatic while lagers swing more smooth and mellow. But beer loves to break the rules. Investigating styles can be a game of sorts, matching the taste to a name. It’s definitely a pleasurable educational pursuit.

The tasting language of beer links to its production. Alpha acids in hops yield a bitter flavor you’ve probably heard described as hoppy. The toasty sweetness of the grain, especially when the base is a malted cereal like barely, generates a malty flavor. Historic beer made with the big four (grain, hops, yeast, and water) can present a complex flavor profile. The ratio of ingredients and when they’re added in the process all affect the taste.

Modern brewers are creative with their additives, such as spices and fruits, which further complicate the flavor profile. A solid description is a helpful resource in deciding whether you’ll enjoy a beer. Don’t feel pressured to pick apart every nuance of the taste. What your server wants to know foremost is whether you like it or not. And if you’ll be ordering another.

Here’s a little secret to beer happiness: you don’t have to like everything you try. Your buddy raves about his favorite brown ale. The Best of Craft Beer Awards gave that coffee stout a gold medal. A bartender tells you this lager is a bestseller. You’re not a poser if you simply don’t enjoy it.

Just don’t give up! Diversity is one of the joys of craft brewing. These brewers create out of love. It’s often an innovative and experimental process. Each brewery is aiming to define their signature flavors.

Keep sampling and you’re bound to find your favorites. Along the way, you’ll meet great people who are happy to welcome you into the fold. Be adventurous and try new things. When it comes to your preferences, listen to your gut.

If your beer starts talking to you, let me know what it says. We’ll compare notes.

Whitney is a craft beer fan enjoying life in coastal Delaware. She has a day job in SoDel, graduate writing classes in Philadelphia, family in Maryland, and a high mileage vehicle. She loves rock &amp; roll and prefers a malty pint. After the tourists go home, Whitney and her husband take long walks on the beach.