This week was the first meeting of the “Reform on Tap Task Force,” a group convened by Maryland Comptroller Peter Franchot to try and get a handle on craft beer regulations. In case you missed it, Franchot convened this task force after this year’s legislative debacle that hamstrung Maryland’s craft beer industry. The aim of this group is to recommend legislative changes to the legislature in hopes of putting Maryland back in a position to be economically competitive again when it comes to craft beer.

Many of the presentations were brief summaries of what most people who read about craft beer with any regularity know. Tourism and economic development thrive with craft breweries, many brewery rules preceded Prohibition and never have been repealed, etc. What was cool about a lot of the presentations were that they set a baseline knowledge for people who aren’t in the industry. 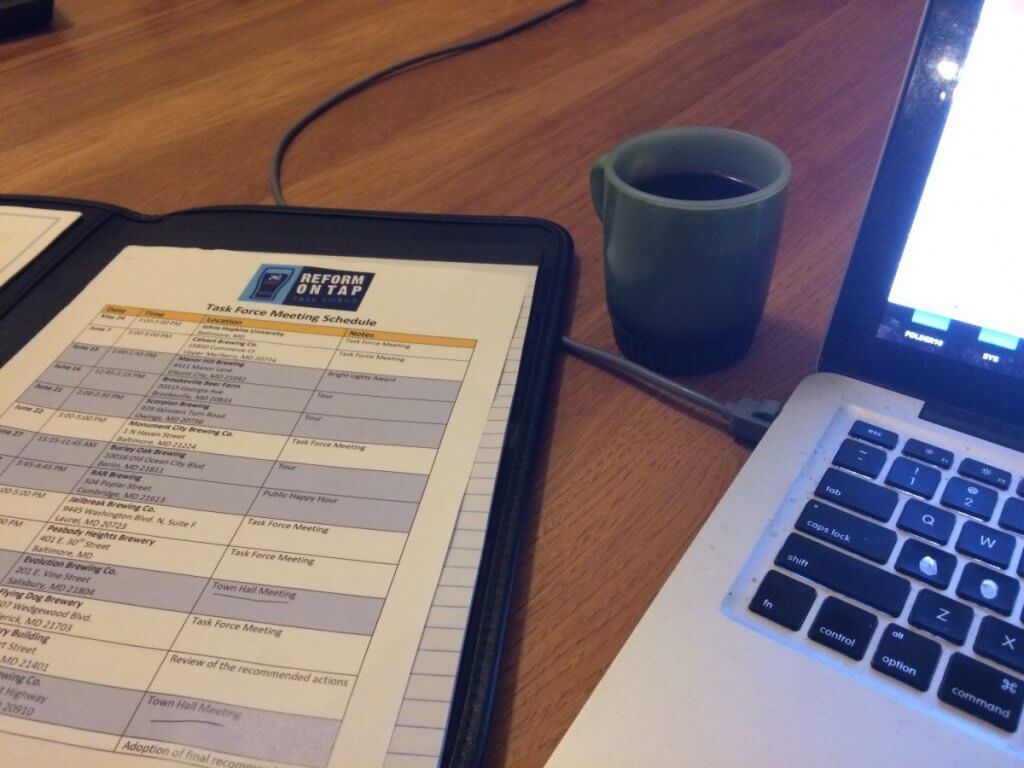 Stories can be more powerful than facts

Two stories stood out and are worth repeating just to kind of set the stage. The first is that Virginia moved very quickly to begin recruiting entrepreneurs when Maryland passed its anti-brewery bill. You see, although the Brewers Association was able to protect breweries that already were open by having a grandfather clause inserted, breweries that were in the planning stages didn’t make it. They were essentially told to take their entrepreneurial spirit elsewhere, and Virginia was happy to offer a craft beer friendly alternative.

The other story came from Salisbury mayor Jake Day. It’s easy to forget sometimes how enthusiastic he is about Salisbury’s Downtown redevelopment project, but this guy is absolutely over-the-moon at the prospect. Wedged between Delaware and Virginia, however, Salisbury constantly is fighting against its less-regulated neighbors for economic development opportunities. Making it harder for craft brewers to open is just another hurdle his town doesn’t need.

Salisbury has had some success at keeping and attracting young and talented people over the last few years, and, Day claimed, businesses are increasingly open to relocating to where the talent is. Salisbury’s average age is under 30 and falling while the counties that border it have average ages above 50 and rising. His argument wasn’t so much that the city needed help as it was that its growth needed less hindrance.

For my part, I’m looking forward to speaking with the independent distributors who are on the taskforce. I know a lot of the time they get painted with a pretty thick brush, but they are there to pursue a deal in good faith. Franchot acknowledged their participation and necessity, pointing out that they also are local business owners and employers just as are the breweries.

I’m one of a couple people who represents consumer interests. I’m kind of a hard-liner when it comes to breweries being able to operate in neighborhoods. I have one in the neighborhood where I live and another in the neighborhood where I work and about four on the route between. Tavern life was one of my academic interests in college and now is a professional one, along with the economic development relationship between breweries and municipalities. That’s why I got so hot after the legislature’s pseudo ban earlier this year.

The other interested parties are the retailers, who have some sort of weird fear of breweries competing with them, or so I’ve been given to understand. As a guy who takes beer out of breweries by the pint (or growler) and out of package stores by the case, I barely get their concern.

By the time we make our recommendations in October, there is no telling how many breweries will have been lost to last session’s legislation. The upside is that in the future one expects Maryland lawmakers will look a little more deeply at beer bills before just signing off on them. Between now and then, we’ll do what we can to get good information to as many people who care to be informed and better stories to people for whom facts aren’t sufficient.