‘Ocean City’s First Brewery’ delivers Ocean City’s first cans.
It’s been a long time coming but the guys and gals at Fin City Brewing Company have brought out the first run of canned beers. A combination of the affordability of canning and the growing demand for good beer in cans was part of the reason Fin City was able to start offering them. But a bigger reason is that as a beach beer, it is important for Fin City to be beach and boat friendly, which can be seen in the choices they made for their debut releases (or as they refer to them, “Reel-eases”).

Beer for Sea and Surf

I got out to the release party last week and, as you really can expect with brewery release parties, it was an absolute blast. For those of you who don’t know, Fin City brews its local beer in the rafters at Hooper’s Crab House, just over the bridge in West Ocean City. Hoopers wasn’t 100 percent open at the time, so the invite-only party included restaurant people, other brewers and some of the local loyal Fin City fans.

I ran into a couple of the managers from Specific Gravity, the restaurant with possibly the best craft beer selection in Salisbury. Amber McBride and Robert Donoway were sampling some of the beers, which included Fin City’s “Catch of the Day” IPA. Even though it technically was a can release party, “Catch” wasn’t available in cans. It wasn’t really even available in kegs. Catch of the Day is a taphouse only beer where they run a line directly from the bright tank (the vessel where the beer is stored) to the tap handle at the bar. It’s a sight to see.

McBride and Donoway, however, were more interested in the canned releases. Besides being a restaurant, Specific Gravity is one of the great stops for local beer to go in Salisbury and they increasingly are trying to meet the rising demand for local beers in cans.

“Over the past six months, we’re probably tripled our can lines,” McBride said. “They’re all over the place.”

Since cans are in, it was cool to see Fin City bring a one -two punch of two highly drinkable beers with different personalities. The WeedLine is as sessionable as craft beer comes and the Double Huk is a bigger DIPA, worth savoring. 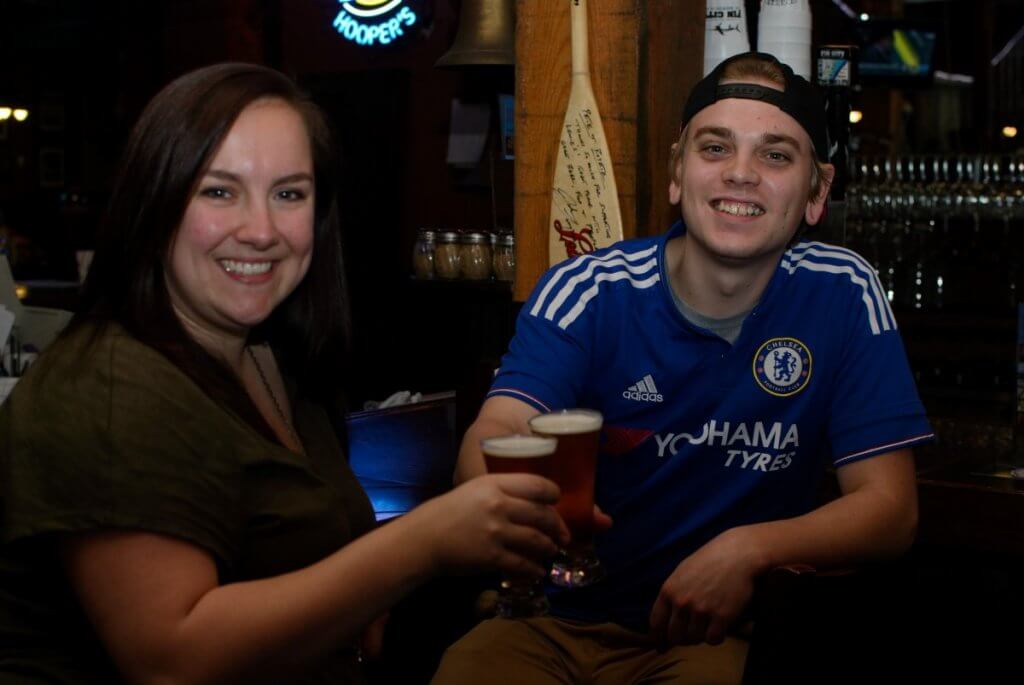 Fin City is kind of a special animal when it comes to brewing. For  their more popular, most widely distributed beers, head brewer Vinnie Wright uses the equipment at a co-op to brew. The idea is that by using a bigger system, he can make more beer in one go. After perfecting WeedLine and Double Huk in West Ocean City, Vinnie scaled it up and brewed in on their bigger co-op system for canning.

But even as it expands to be a regional brand, Fin City likes to maintain an Ocean City exclusivity. To that end, they brew beers in the rafters at Hoopers that only are distributed in the immediate vicinity. They’ll try things that are only available at the bar at Hooper’s (like the Catch of the Day IPA), but also they brew lots of beers all year that only go to local places, like the Globe in Berlin.

I got lots of fun photos at the event. Here’ s a link to the Gallery.