The press and other guests enjoyed hors d’oeuvres compliments of the Aloft Hotel Ocean City and a variety of locally produced craft beer samples donated by Shore Craft Beer. The event was free and open to the public.

Proclamations from the Governor and the Senate were read by Carol Rose, a representative of Maryland State Senator Mary Beth Carozza’s office. This is the fifth year in a row that Shore Craft Beer announced Governor Hogan’s declaration of FeBREWary as Craft Beer Lovers Month.  Senator Mary Beth Carozza’s recognition of Shore Craft Beer as instrumental in the promotion of craft beer related tourism here on the Shore is a first.   “We are so honored that the Governor continues to recognize the value of craft brewers and craft beer to our state and that Senator Carozza and the Delegates have recognized our hard work.  We will continue to spotlight the Eastern Shore as the place Where World Class Beer Meets World Class Beauty,” stated  Ann McGinnis Hillyer, CEO of Shore Craft Beer.

ShoreCraftBeerFest.com will be Showcasing Participants of FeBREWary

Businesses of all kinds have embraced FeBREWary and are creating deals and discounts in Ocean City and the surrounding region.

Breweries at Love on Tap Festival

Love on Tap Festival will be Culmination of a Month Long Celebration. 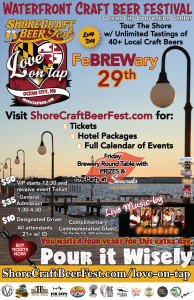 You Waited  Four Years for this Extra Day, POUR IT WISELY

Held, Saturday, February 29th, Leap Day, the Love on Tap Festival will be on the last weekend of Craft Beer Lovers Month. Shore Craft Beer has exhaustively promoted the Craft Beer Lovers Month and the Fest weekend so that visitors to the Shore will find hotel packages, restaurant specials, & drink menus that salute the month with deals and discounts that resinate with craft beer lovers. “With each year, Love on Tap Festival and the celebration of FeBREWary have grown in Ocean City and the surrounding region. We are thrilled to be the caregivers of an event that continues to expand and mature during the off season. We look forward to finding out how future years will break records,” said Hillyer.
The Love on Tap Festival will be held in a new location, the Ocean City Convention Center. Other Activities new to the festival this year:

All these NEW items & activities will enrich attendees experience at the Shore Craft Beer Fest. This will be the first Love on Tap festival where tourism marries local craft beer with more fun being the result!  Expansion and growth continue  with The Love on Tap Weekend which will include events Friday through Sunday. Events for the public begin Friday, February 28th, with the Brewers, Bloggers and Beercations Round Table at Ocean Downs Casino and the  Liquor Before Beer Pre-party at Seacrets. All festival participants can check-in early to the festival, get their wrist-bands (which they must keep on) and VIP t-shirts so they can avoid some of the processing time at the festival itself.  Details can be found on ShoreCraftBeerFest.com/love-on-tap 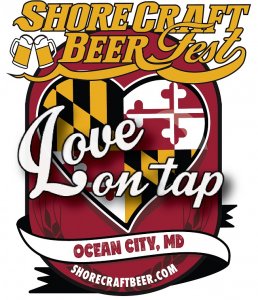 Tour the Shore at Love on Tap – What does that mean?

Beyond the beer, the Shore and all of its highlights will be the “other” component of the festival that will enrich the festival goers experience.   DMO’s (Destination Marketing Organizations) from Worcester County, Talbot County, Wicomico County, Town of Ocean City, Town of Berlin, & Southern Delaware Tourism, will all have booths at the fest. Their distinct areas will highlight what makes their region noteworthy. Fest participants, with beer-in-hand, will explore the peninsula without needing to leave the convention center. The intention will be to peak fest goers interest in different parts of the region and entice them to visit the counties and towns at a later date.

What Else is New for this Year’s Fest?

Bloggers from as far away as Texas and New York are an exciting new part of this year’s festival. Their participation can help make the Shore a top craft beer destination nationally. Some of the Bloggers will participate in the Brewers, Bloggers & Beercations round table on Friday, February 28th, 5:30pm, at Ocean Downs Casino.  This event is limited to 600 people and will be a fun and informative discussion of what is HOT in craft beer today.  Bloggers will discuss the hottest topics for their blogs, brewers will discuss what is new at their breweries, what is popular, and what they are doing to attract craft beer lovers to their breweries.  Finally, we will host Rick Meehan, Mayor of Ocean City and a representative from Salisbury and Wicomico County to discuss what breweries and craft beer are doing to their towns and counties and why craft beer related travel is cool AND important.

Finally, Shore Craft Beer will detail of the new state-of-the-art craft beer App which will be available in FeBREWary to highlight local craft beer related businesses. The new version of the app was funded in part from a a grant from the Rural Maryland Council.
Features to look out for: