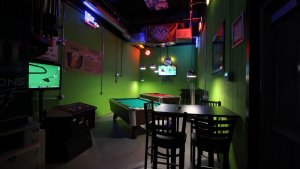 So among all craft beer spots on the Eastern Shore, Hopper’s Taphouse is, well, very important. Pictured above is a Noir et Bleu by Delaware brewery Big Oyster. This particular beer is 1 of 42 that is on tap at any given time at Hopper’s Taphouse. Taphouses are not particularly out of the ordinary, wherever you may go in this world. But the business approach of Hopper’s makes this Taphouse stand out. Located on South Salisbury Boulevard, across from Seagull Square, Hopper’s attracts both a younger crowd and a local crowd. I could not pass up the opportunity to check this place out for my latest installment of BL’s Barhop.

Green walls enclose a dim-lit bar and play-room, one of numerous amenities available here. The Hopper’s complex is essentially a grand atrium, reminiscent of a greenhouse, off of which one can find a number of small eateries, and then the bar itself. This atrium setting is ideal for parties or other large gatherings; however if you just want to chill, I definitely recommend a seat at the bar.

Who doesn’t love a family-owned business? Glenn Ains is the owner of Hopper’s, and like most great business owners, he is often found doing the grunt work alongside his managers and bartenders. He can be easy to miss as he makes his rounds tending bar, entertaining customers, and keeping things in working order around Hopper’s. That being said, you should probably have a conversation with him at some point in your life.

Glenn tells me that after his time in the real-world (not Glenn’s words), he came to the Eastern Shore to raise his family. Somewhere along the way, his local craft beer constituents encouraged his pursuit in taking on a Taphouse. And the rest was history. Kinda. Glenn’s approach to Hopper’s Taphouse is to prioritize local beers and give customers a damn good time. Each day of the week Hopper’s offers some sort of engaging event. Whether it’s live entertainment or drink specials, Hopper’s is a place where things happen. Except for Fridays, as I am told that Fridays are just always good days to be at Hopper’s. But in a sense, every day is a good day to go to Hopper’s as they happy hour every day. Yes. I hope you feel like you’ve been missing out. Also, don’t ask me why Glenn’s beer is glowing. It’s what happens when your business model transcends the mundane routine of a traditional barhop.

I’m not going to name drop the array of brews Hopper’s carries. It is your own duty to make your pilgrimage here and experience the Taphouse for yourself. Learning what I have learned about Hopper’s Taphouse, I am reminded of the idea of “avant-garde” in the art world. Beer is truly an art. And with Hopper’s updating their menu every week, picking new and lesser-known local beers, I consider this place not only a drinking establishment, but a celebration of the craft. Here I go, rambling again. Be sure to watch the new episode of BL’s Barhop, and drink local (and responsibly) at every given opportunity!

BL works for a TV station. He drinks beer and takes picture of beer in his spare time. These pictures can be found on Instagram @BLandbeer.