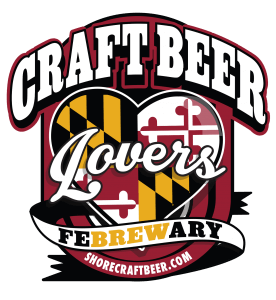 Breweries, like the taverns of old, are as much a gathering place as a place to get food and drink. In the Eastern Shore towns where they’ve sprung up over the last decade, breweries have become not only centers of culinary exploration, but also of the visual and performing arts, hosting exhibitions, concerts and even craft fairs. Places that serve craft beer generally are neutral meeting places for culturally like-minded people. That is, people who prize community and individuality equally and who enjoy being open to new experiences. Add to that the social lubricant that craft beer tends to be, and it is no surprise how often sparks fly over craft beer.

Throughout the month of February, we will be recounting stories and videos that remind us that there are interpersonal reasons, as much as there are culinary reasons, that people continue to find an attraction to and through Craft Beer. Each week, we will add new stories about people who found craft beer and love on the Eastern Shore. We have stories about a young couple who started brewing together, of a bartender at a local brewery who was smitten with a woman who was smitten with the beer he sold, of a couple who arranged to help brew the beer that will be served at their wedding, a brewer who married a craft beer fan after she dissed his beer, a couple who started out having brewing dates and eventually opened the first brewery on the Eastern Shore together, and many more.

Below you will find the links to these stories and videos. If you have your own story to share, please do it here.