It’s early, very early, in the morning, and you’re driving through town to pick up some groceries. Suddenly, there are cars backed up down the street—hundreds of them. They’re parked on curbs and piling into businesses’ lots. The license plates are from a panoply of states. All the owners of these cars are already lined up around the block to get their share of the limited-edition beers your local brewery (which doesn’t open for hours) is selling. This relatively new phenomenon is a “can release.”

Breweries have begun releasing small batches of fresh, new beers usually in four packs of 16 oz. cans, to devoted craft brew lovers, sometimes more than twice a month. They announce the can releases ahead of time through social media, and more specifically Instagram. More often than not, they completely sell out of the new beers just a few hours after they open for business. There is always a purchase limit, since the supply is so low. It’s not uncommon to see people with cases of beer already in tow when they arrive, as they plan to trade with other collectors after they’ve gotten their new products.

Social media has been invaluable to promotion for small brewers. On the website Reddit, there is an entire subgroup of users listing upcoming releases, with over 6,000 followers. By posting on Instagram, breweries give attendees the chance to plan their swaps ahead of time through the comment section. There are acronyms for different phrases that appear in users’ comments; for example, “ISO” means “in search of.” Beer trading has become more and more popular as breweries have expanded into experimental territory and flavor palettes, but more about that later.

The types of beer at can releases can vary, but it is almost always a New England style, hazy IPA. (There are exceptions; check out Burley Oak Brewing in Berlin, MD for their “J.R.E.A.M.” releases, which have garnered a huge cult following.) There’s a method to the madness behind releasing IPAs—their quality and typically bold flavor and hoppy-ness diminishes in a few weeks, making the day they are released the best time to buy them. You can be assured they were canned as recently as the night before. They don’t “expire” per say, but they do lose the freshness one expects when cracking one open.

IPAs are the most produced of any type of craft beer, but these specialty releases will carry a higher price tag than a typical six pack, which is great for brewers. By selling directly to the customer at the brewery, they cut out of the cost of working with a distributor.

Unfortunately, the small batches of beer will sell out. Waiting in line doesn’ 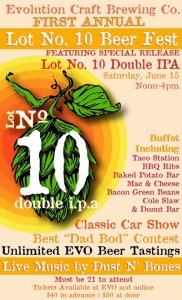 t necessarily guarantee you will get your haul of fresh releases. People will cue up for a release at 11 a.m. at 7 a.m. and still don’t get the chance to buy their share. It’s not a terrible idea to bring a folding chair with you; you may be in for a very lengthy wait. You also want to bring something to carry your beer away in; don’t count on the brewers having enough boxes for everyone. 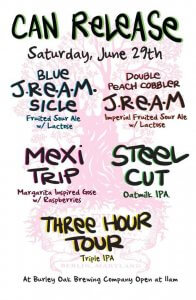 The hype and the social aspects of releases are almost more popular than the taste of the beer itself. Can releases are based on a vast interactive social network. #Beerrelease and #canrelease have been tagged over 36,000 times on Instagram. For brewers, the releases are a free brand awareness and advertising campaign, with social media users sharing and reposting, effectively doing all the work for them. After a few successful releases, all it takes is a post or two to retain and gain new followers. General speculation suggests that the nature of the release is what makes it exciting. The product is fleeting, and that means those who get their hands on the new beers count themselves lucky and win social media bragging rights.

The events are “feel good” and community based, as well. There’s a palpable sense of comradery. Attendees often come with family, friends, or significant others. People converse and trade in lines, sharing stories about past releases, their own collections, and which beers are best. Often brewers collaborate with local restaurants and food trucks to share in the collective profits. Many people make a vacation out of the experience, having travelled from a great distance to attend. Employees get extra time on their books as well. New cans mean new graphics work for labels and brewers must double down on staff to sell beer as well as to keep their bars open. Breweries are typically open for standard business as well as the sale of the new cans on release days. Often, they have the release beers on tap as well. Don’t wait to try it before you buy however; by the time you’re done with tasting, the available stock will likely be gone.

All in all, can releases are exciting, ephemeral events for true aficionados as well as first time buyers. The clientele waiting in line for the brewery to open isn’t exclusively the type of flannel wearing guy you may find filling his growler at the bar. They are people from all walks of life, building a new network of friends and experiences.

To see when the next release is planned at your favorite local brewery here on Delmarva, you can visit our events page at shorecraftbeer.com/events. Upcoming this weekend, June 15 at noon is Evolution Craft Brewing’s “Lot No. 10 Beer Fest,” featuring unlimited EVO beer tastings, live music, and a buffet from their Public House featuring “Famous Father’s Favorite Foods” for Father’s Day (June 16.) The featured EVO release will be the “Special Lot #10” Double IPA. Brick Works Brewing and Eats will release “Tropicana in My Pocket,” and “Justin’s Fruited,” a lactose sour infused with peach, apricot, pineapple, and mango puree on June 20 at 4p.m. The first 144 guests will receive a commemorative glass and fill for $8. There will be $3 refills until 7 p.m. Burley Oak will host a release on June 29 at 11 a.m. including 16 oz. 4 pack cans  of “Blue J.R.E.A.M.-sicle,” a fruited sour ale with lactose; “Double Peach Cobbler J.R.E.A.M.,” an Imperial fruited sour ale with lactose; Steel Cut, an oatmilk IPA, “Mexi Trip,” a margarita inspired Gose with raspberries, and “Three Hour Tour,” a triple IPA.

To become a true part of the can release cult following, check out some can release accounts and hashtags on Instagram, and follow us @shorecraftbeer. You can also visit craftbeer.com or beeradvocate.com for nationwide releases.