Tall Tales knows beer, and Candy Kitchen knows fudge. This month, the businesses — two respective experts in their respective fields, Tall Tales a staple brewpub on Delmarva for over five years and Candy Kitchen Ocean City’s reigning champion of candy sales since 1937 — have joined forces to create the sweetest beer on the Shore.

The beer is simply called “Candy Kitchen,” and it’s a double chocolate fudge oatmeal stout with an ABV of 7.7%. 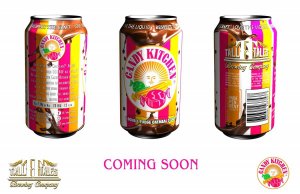 “People are like, can you give me a description?” said Tall Tales’ head brewer Eric Camper. “And it’s exactly what you’d think — it’s thick and creamy and it’s amazing.”

The family empire who owns Candy Kitchen also operates a handful of restaurants in Ocean City, including Blu Crab House and Mad Fish Bar & Grill, which both serve Tall Tales’ beer on tap. In 2017, the candy shop and the brewery started knocking around the idea of collaborating on a beer, and eventually Camper picked up 60 lbs of fudge from the shop and incorporated it into a stout recipe he’d been keeping on the backburner.

Camper’s already thinking of future collaborations with Candy Kitchen, like a brew that would incorporate their famous saltwater taffy. Think a lime gose-style beer, salty and sour to complement the flavor of the candy.

Camper, who also designed the beer’s label (and all of Tall Tales’ labels, for that matter), says he has 40 barrels of the beer and plans on having it on tap through the winter, beginning in January. They’ll also distribute it locally in Delaware, Maryland and Virginia.

The only thing that kept “Candy Kitchen” from debuting before Christmas is the brewery’s new canning line, which should be up and running for the new year.

“Cans are all the rage, that’s what they say,” Camper said. “Once we start canning, I don’t think we’ll be doing that much bottling anymore,” although, he added, they’ll maintain the capability to do both.

With the new canning line comes new brews, in addition to the Candy Kitchen collab. “She’s a Brewhouse” (which you have to pronounce as “She’s a Brew… House”) is a coffee and coconut imperial porter. “The Cheesecake Brewery” is a peanut butter chocolate cheesecake stout. And “Hood,” a hoppy American IPA, is making a comeback, this time in a 12 oz. can.

Big things will be brewing at Tall Tales in 2019. If you aren’t able to make your way down to the brewpub soon to try “Candy Kitchen,” pick it up at your local Tall Tales dealer… And maybe, just maybe, we’ll be blessed enough to try a sample of the double chocolate goodness at Shore Craft Beer Fest: Love on Tap at Seacrets this FeBREWary.