You get the sense that Mike Bouni isn’t a half-measures guy at all. He speaks slowly enough and clearly enough to be understood, but when he’s talking about beer or science he has a bit of a frenetic aura, as if he were trying to radiate his enthusiasm to the rest of the room. I met Mike on a recent trip to his home to get a hands-on demonstration of how his newest piece of homebrew equipment worked, and to write an expository review of The Grainfather, a next-level piece of homebrew equipment. My daughte 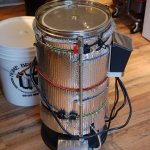 r, Allison, came along as photographer and navigator, as one of my hobbies is getting lost out in the country. She gets credit for the photos as well as for the fact that I was half-an-hour early.

Mike is a science professor when he isn’t brewing and, although he is clear that he isn’t an accomplished homebrewer, he isn’t shy about demonstrating that he has his shit together in the science department. He took both my daughter and me through the science behind the brewing using the socratic method to keep her engaged and enthused throughout the talk, most of which, as it turned out, happened to be about yeast.

Like many people who have been bitten by the homebrewing bug, Mike is inherently ingenious and a tinkerer. His home brewery is a shed he had built to order and then tricked out with the kind of insulation, ventilation and electricity that allows him to brew indoors all year. For him, especially in the spring, capturing and cultivating wild yeast is part of the brewing process. He captures yeast when he is out and about and, using some of his own equipment and some of the gear at the university where he teaches, is able to test it to see how well it will ferment beer and even to get a handle on how tasty it is.

After that, he makes what might best be described as a yeast-forward beer from the yeast he’s cultivated, a stripped-down version of a lightly malted, lightly hopped beer that gives you a sense of how the yeast is doing. The one I tried wasn’t finished carbonating yet, but even to my mediocre palate there was a bit of banana and crinkly taste that was sour-y in a wild yeast way. It looks as if he might have discovered a new strain of yeast, but he can talk more about that at the Grainfather demonstration, which is, in the end, what we were there to discuss.

On a recent Beer with Strangers podcast, I several times had to stop and announce that not only wasn’t it a Ronco commercial, but also that Grainfather wasn’t giving me a nickel to promote it. So I’ll repeat that before we get started. Still, 10 minutes into his explanation you could see how Mike was getting excited about the equipment, not because it was easy but because it was efficient.

The efficiency appealed to his mechanical disposition. He liked that they had taken so much into consideration in the design, but he also (I think) liked having the opportunity to add his own enhancements. As I mentioned, he is in the tinkering class of homebrewer, and the Grainfather is for people who love to brew beer. It is not for novices (although if you are a novice, there are a ton of people, including my friends at Xtreme Brewing who would be happy to brew with you until you weren’t). Rather, the Grainfather is for people who have been all grain brewers for a bit and want a little more control and maybe the ability to brew inside all year easily.

The Grainfather is more than just homebrew equipment

This isn’t in the class of the new auto “set it and forget it” beer-making machines. It is a combined kettle and mash tun that allows you to control the temperature and the cool down as precisely and efficiently as anyone could hope.

For guys like Mike, who like to make a ton of different beers five gallons at a time, there’s a lot to be said for The Grainfather. It is electric, which means once it gets up to temperature it stays right on the number without variation for as long as you would like. It has a stainless steel basket inside that allows you to drain the water from grain with a simple raised-colander-inspired maneuver. You lift the basket, turn it, and it settles onto special ridges that allow you to walk away and do other things while the water runs out.

The cooling mechanism for bringing down the wort temperature is one of the places where brewers save the most time and energy. The beer and cold water both go into an apparatus that doesn’t look unlike a copper wort chiller but works a little differently. Within the spiral are two tubes, one for the cold water, one for the hot beer. They run counter to one another and help bring the temp down as faster than most other practical methods. If you make the kind of beers wherein the cooling process is critical, this is an invaluable tool.

This story has been revised to remove time sensitive material and repair bad links. — Ed.