Winter always overstays its welcome, but seasonal spring beers always come a little bit early — and for that, we are grateful. (Sorry stouts, but your time for the year is just about up.) At Shore Craft Beer, we’ll be mostly spending the month recovering from another successful FeBREWary and Love on Tap festival, but there are still plenty of beer releases and brewery events to look forward to.

So, have a happy St. Patrick’s Day! The next time we see you will probably be at the 3rd annual Hero’s Challenge on April 27 in Salisbury, featuring craft beer from three of your favorite local brewers. After that, we’ll really be in the swing of spring, especially on May 11 at our beer festival in downtown Cambridge, Md., which will feature live entertainment, food trucks, and unlimited tastings of local craft beer from Maryland and Delaware. Tickets will be available soon, and we’ll be sure to keep you updated. 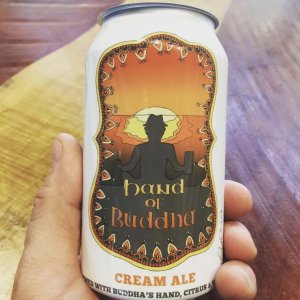 Can release at Crooked Hammock — Friday, March 1 — Start the month off right at Crooked Hammock’s Hand of Buddha draft and can release. Their spring seasonal is making its return to the brewpub, and will be available for purchase in 12 oz. six-packs and limited cases. Open at 11 a.m.

Barks and Brews adoption event at 3rd Wave — Saturday, March 2 — Do you dream of drinking a craft beer with a furry, loyal companion by your side? Enjoy delicious craft brews and meet some of Grass Roots Rescue’s awesome adoptables in 3rd Wave’s Delmar taproom from 2-5 p.m. Beer tastes even better when you have a friend to share it with!

Can release at Big Oyster — Saturday, March 16 — Just in time for St. Patrick’s Day, enjoy the limited release of the Shamrock Dreamsicle: triple dry-hopped with Citra, Mosaic, and El Dorado hops, and laid to rest on two handfuls of fresh mint and vanilla bean. Drink in cans in the taproom, or get one to go — The Shamrock Dreamsicle will be available in cans, growlers, and crowlers. Open at 11:30 a.m.

Come back the next day for the St. Patty’s Day celebration at Big Oyster Brewery! There will be live music, food, a Leprechaun Hunt, and more Shamrock Dreamsicle, all from 11 a.m.-6 p.m. on March 17. 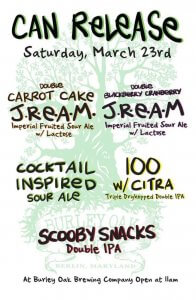 Can release at Burley Oak — Saturday, March 23 — Stop by the Berlin brewery on the 23rd to catch this limited can release. The Double Carrot Cake and Double Blackberry Cranberry J.R.E.A.M.s (imperial fruited sour ales with lactose), in addition to the Tropical Gin Fizz fruited cocktail-inspired sour ale, the 100 Citra triple dry-hopped double IPA and the Scooby Snacks double IPA, will be available for purchase in 16 oz. four-packs. Open at 11 a.m.

Beer release at Brick Works — Thursday, March 21 — “It turned out last year that Nautical Nonsense was something you wished. So we brought it back this year!” Nautical Nonsense is coming back to Brick Works’ Smyrna taproom. They’re offering a commemorative glass with a pour for $8 and $3 refills from 4 to 7 p.m. while supplies last — Are you ready?

Sip ‘N Sign at Evolution — Monday, March 25 — The Sip ‘N Sign workshop at Evo entails making a unique wooden sign with materials, including custom cut stencils (no artistic ability necessary!), with The Rusted Mermaid. A portion of the proceeds will be donated to Village of Hope, a non-profit organization that provides transitional housing for women.

While you’re marking your calendar for events at Evo, be sure to flip to April and put a star on the 20th — that’s the date of Evo’s 10th Anniversary Party. Evo will be celebrating the big 1-0 with unlimited beer tastings, a BBQ buffet, and live music from Opposite Directions and Red No Blue.

Sustainable Wine Dinner at Tall Tales — Thursday, March 28 — If you’re sick of the craft beer by March’s end (only kidding, of course), Tall Tales will be hosting a Sustainable Wine Dinner in their restaurant. The Around the World tasting dinner includes four courses paired with great wines from vineyards that care, plus discussion on what makes a vineyard sustainable and how it impacts the community and the environment.

Okay, now back to beer. You can sample wine and Tall Tales’ beer at their Pop Up Happy Hour Party on March 19, featuring their brew crew and wine experts to chat about their respective crafts.