As a kid, you learn to associate experiences through repeating things other people say when they appear to be having the same experiences, learning the language of taste is the same way. I came to craft beer through a fortunate, but backdoor-y, series of events. I was covering craft beer as a general assignment reporter about a decade ago. Both because the brewers of the day were trying to communicate to other people through my stories and because I really appreciated beer, I was able to learn the language of beer relatively quickly. Language is everything. When someone is drinking the same beer you are and talking you through the tastes long enough, you start to get your own sense of how to take that information and apply it to other beers.
While I was learning how to distinguish coriander in a beer, Suzanne Wolcott was already brewing her first beers. A cheesemonger by trade, Wolcott had begun making a name for herself in the slow food artisan movement. As she went from specialty store to niche boutique selling her cheese she also ingratiated herself into the larger world of artisan food and organic production. Speaking with her, it is clear to see not only that she knows what she’s talking about, but that she can be direct without giving offense, like a well-respected professor.
After a stint as a buyer for Whole Foods, Wolcott was brought on at Goose Island Brewing as a Food Specialist.

You don’t have to pretend with craft beer

As craft beer rocketed to popularity, it was well enough for many of the new adherents to begin to understand the language of beer, but there was another step involved in the long term. Craft beer had a

component that never before had been available on so large a scale: complexity. Gourmands drink of choice generally had been wine, because it was known to enhance the flavors as well as the overall dining experience. But if the dining experience was about enjoying the interplay of flavors, than it was clear that the new beers would do just as well.
Wolcott was clear that it isn’t a better-than, worse-than relationship when it comes to pairing beers or wines with food, but if your endgame is understanding, beer is a more accessible path.
First off, beer’s subtleties are easy to detect. The language is a bit easier to learn and the possibilities are a bit more far-ranging. It’s the difference between known what someone means when they say something tastes (say) of meadow versus (say) of toasted bread or biscuits. Wolcott put it this way: “Beer flavors are more foodlike.”
Talking with a local brewery rep about the beer they made provides even more take-away insight. When a beer tastes like X, we describe it as Y. It can get more complicated, but the bar to entry is low. When it comes to taste, anyway.

The downside to being a food specialist working to improve access to craft beer is that there is about a century of marketing that says beer is for drinking ice cold after mowing the lawn (or working on the car, or another manly, blue collar activity). Wolcott’s message is that while there are some beers that are for that, there are more beers that have greater potential. Even over the last few decades, the cultural message was that wine was for women and food snobs and beer was for men. It’s a message that pervades among the less-informed even today. Women can be astronauts but not beer drinkers.
As Wolcott has seen, though, with the rise of the celebrity chef and more popular access to the culinary world people are coming around on craft beer as an accompaniment as well as as an ingredient.
“People want to know who makes what they are eating and drinking,” Wolcott said. “But it’s entertainment too, It’s not only about eating and drinking.”
When she came to Goose Island her mission was to teach the people selling the beer to the bars and liquor stores how to talk about beer as a meal accompaniment. Cheese was an easy access point.
There is something about cheese and craft beer 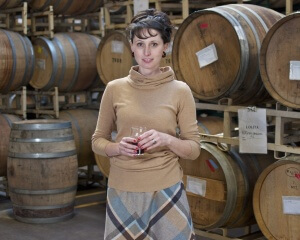 What makes cheese a good partner for beer when it comes to pairings and tastings is that both can be as complex or simple as the taster wishes. The carbonation of beer interacts well with the fats and flavors of cheese. That it lacks the acidity and tannins of wine also gives beer a distinct advantage, but all in all it also bespeaks a different kind of sophistication. Understanding the best way to pair beer and cheese is an excellent way to introduce your palate to the complexities of both. Beer and cheese’s counterpoints as well as their dovetails can clarify the definitions of each all the more.
“Beer has every justification to be on the table at a fine dining establishment,” she said.
Today, Wolcott holds classes at the brewery on cooking with beer and pairing beers and cheeses as well as other foods. She does community outreach as well, showing people how her brewery’s beers pair with local fare. She has a web series you can find here.